skip to main | skip to sidebar

I have worked on quite a few Uav projects, both for work and my own projects, the difference being that the one for work cost a fortune and we had a super large budget! and the home made ones that are basically recycled from other parts, and adhere to my Ghetto engineering philosophy.

Here is a brief overview of the main projects i've worked on! there are more, but i havent really documented them properly!

Big blue flying wing designed for police search and rescue around the lochs in Strathclyde, Scotland where the weather often is not clement enough to allow the police chopper to operate. 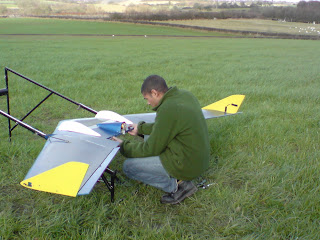 The big blue bird ( I cannot divulge the actual name and company as I no longer work for them) carried a super sensitive infrared camera, a high quality video camera on a controllable gimbal, satellite navigation, autopilot, target camera locking, live video stream, navigation lights for night flying and the full she-bang. we were toying with the idea of adding droppable containers containing a thermal blanket/radio or transponder for missions involving stranded ramblers.


Below is a clip of this UAV's maiden flight, it is being Catapult Launched! this thing weighs nearly 15 kg!

Smaller black flying wing, project started by another engineer, I joined the project midway and realised that the platform was too small to carry the gear they wanted.We attempted wing extenstions for different flight payloads, and eventually, I proposed a bigger aircraft and commenced the project discussed above. The capability of this aircraft was similar to the one above, minus the infrared and emergency drop payload and a reduced flight autonomy

Both these aircraft ran an extended trial with the strathclyde police with promising results, but then again politics and finance always get in the way of great things..

The smaller aircraft was a record setter at a famous unmanned aircraft show..


Ghetto bird! my first home build uav, much smaller budget, dropping from over 10 k to under 2 hundred! Arduino based, it uses a wii nunchuck and wii motion plus for positional data, the radio signals from an rc receiverare bypassed through the arduino which creates an artifical horizon and controls the servos to return the craft into this reference position.

This allows the craft to return to straight level flight when the control sticks are at the neutral position and the craft is disturbed by the wind or the gyroscopic effect of the prop on the light airframe. this also stabilised the aircarft during banked turn, climbs and descent by maintaining the current attidude of the aircraft and resisting and countering external disturbing forces proportionally in a closed loop system.The idea is to create a stable air platform to carry a video camera. Ghetto bird was never flown as i deemed it too risky with the horrible winter weather of the UK. All the planes are currently grounded until next summer.

This project is currently ongoing and the electronics have been moved to a flying wing of 1.5 m span,Ghetto bird 2, 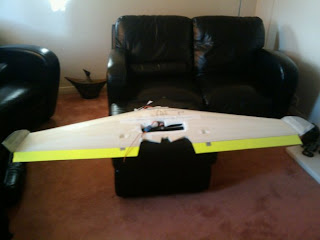 More lifting power, lower wing loading. I am planning to add a live video downlink, an xbee pro transmitter to return telemetry data, and overlay this data onto my video stream.the idea is to create a virtual cockpit and fly the stabilised aircraft from a pilots perspective . airspeed/altitide pressure sensors and GPS for telemetry.A forcefeedback joystick is an being considered, but the project is on hold as i am waiting for money to come in!

Below is a video of Ghetto bird 1.5, a smaller version to test out the flight characteristics, It is being flown manually with no flight assistance

Current status : grounded, waiting for funds, better weather and work is being done on it at mo!

Watch this space!
The Fropessional Engineer!
Posted by Nick at 04:08

Nick
Aeronautical and Mechanical graduate with 13 years experience in industry, and about 20 years of experience on homegrown Engineering projects.